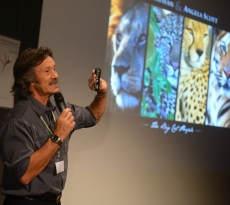 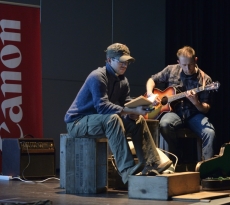 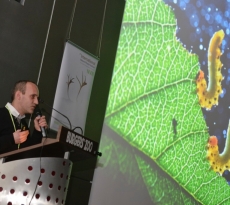 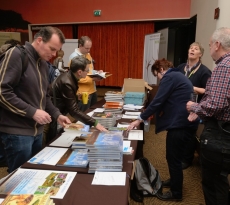 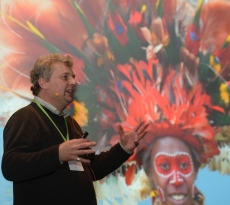 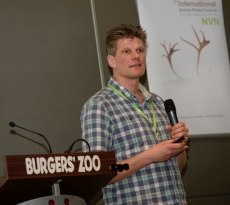 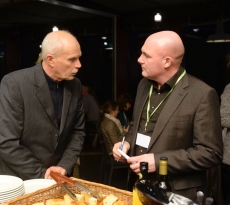 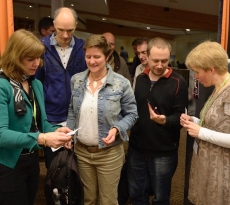 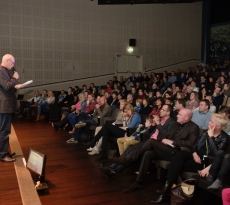 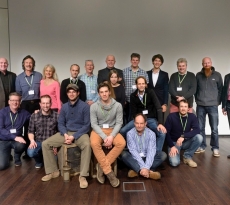 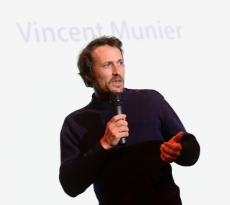 After the opening of Burgers Zoo, the Safari Meeting Centre immediately began to fill. Let’s take a short look back to the successful 7th NVN International Nature Photo Festival.

After the enthusiastic visitors had entered, they immediately threw themselves onto the various stands in order to gape at the largest telephoto lenses, buy books or subscribe to one of the pretty photo magazines. At 9.30 the Centrum voor Natuurfotografie started off the seminar programme. In their own unique way, Bart Siebelink and Edo van Uchelen took the visitors into the world of nature photography.

In a full auditorium Angela and Jonathan Scott did not only show wonderful images of Africa and Antarctica, but especially talked about the making of: the right light, conscious composition and a thorough preparation. The Scotts had a stimulating message, simple and clear, for everyone: “Tell your own story, even though there are no lions here. You do not need those for a good photo. Follow your passion.”

Next was Leon Baas. His seminar started with an ‘airy’ audiovisual. Some of the AV images together with a dozen other brilliant photos were then discussed. Without mincing matters, Leon told all the inns and outs of these photos: reflectors, flashers and other aids, talked about the brands or whether it was home-made. All aids were shown live and passed on through the enthusiastic audience.

David Tipling finished the seminar programme with a series of impressive bird pictures, together with the odd city otter and hares. Full of passion he took the spectators on a trip into his personal adventures.

During the lunch break there was ample time to get a delicious sandwich or roll, capture the bush with a camera or visit the photo market. Five lucky people had been invited for a personal portfolio review by Angela and Jonathan Scott, Lesley de Beer and Jan Vermeer. The images were often amazing and of a high level. Those interested could also get information on the NVN Youth group, or could of course join them immediately.

At 1.30 p.m. the time had finally arrived. President Eric Bergmeester welcomed everybody and gave the floor over to Peter Muller who opened the afternoon programme. In previous editions Peter had only fulfilled the role of ‘anonymous’ chairman, but in this edition the time had come to get acquainted with this versatile person. Peter demonstrated his passion for duo photos, called juxta, which enhance each other.

With Joris van Alphen we went on expedition to Mount Kinabalu. For the first time a large group of biologists went on a search for life on this enormous high mountain in Borneo. Joris captured the expedition and the many special finds. The results were published in National Geographic Magazine.

Much closer to home, also in your backyard, there is also plenty to discover. Leon Baas showed us his favourite ants and wood lice. Time and time again the audience was surprised by the marvellous beauty of everything that is normally not loved. Possibly the most peculiar images were the ones that had been made with his self-made large angle macro lens.

From the super realism to the artistic abstract work by Sandra Bartocha. It is this alternation in styles during the entire festival that captivates the visitor from beginning to end. In this audiovisual Sandra showed her surprising and innovative view on nature. With many of her pictures you first had to focus in order to know what it was that was shown. That made this presentation very interesting.

After a short break it was time for David Tipling. In a special presentation David showed the often, not so positive, relation between people and birds. From centuries-old mosaics to impressive bird ornaments of traditional peoples and from birds on a plate to cock-fights.

Theo Bosboom showed new images of his beloved Iceland and also of his latest project ‘autumn under water’. Autumn leaves in a stream, white crests and of course his winning photo of the Wildlife Photographer of the Year Competition.

After the second short break we stayed with the young for a short time. The Marius van der Sandt Stichting presented itself to the public. None other than AndrÃ© Kuipers underlined the importance of master – student. AndrÃ© presented the first copy of the book ‘Oog voor natuur’ (Eye for Nature) to Mart Smit, coordinator of the NVN Youth Group. Obviously, AndrÃ© went on to take the visitors to the ISS and he showed the earth from its most beautiful side.

Once back on earth we continued with the peculiar work of Jonathan Lhoir. The title of the presentation, ‘Black and Wild’, said it all and formed a perfect summary of the presentation: dark, surrealistic photos with a high degree of abstraction. It is remarkable that Jonathan succeeds in using his personal vision on nature photography for both landscapes and animals in their surroundings as well as macro images.

Tension rose when all kinds of articles appeared on stage. Chests, a guitar and a buoy formed the background for the most striking presentation of the day. Jasper Doest showed us the last real wilderness of the Netherlands, Rottumeroog. The photos were accompanied by live guitar music and Jasper told a story in letter form. A unique and special presentation that cannot be captured in words, you should have been there yourself.

After an extensive evening buffet it was time for the last speakers. First of all, Angela and Jonathan Scott. This time the Scotts did not show any photos but presented films, a sort of making of, which gave an insight in their approach, how they come across wild animals and their home base.

Vincent Munier closed the Photo Festival with an impressive presentation. At first the photos were remarkable ‘colourful’ but at the same time distinctively empty. In Tibet, Vincent went in search of the wild yak, a virtually impossible task. Tibet’s landscape is unimaginable vast, whereas yaks are very shy. With enormous perseverance the Frenchman finally succeeded in photographing the yaks up close. In the second part of his presentation Vincent showed another impossible expedition, namely to the white arctic wolves on Ellesmere Ialand. Completely on his own Vincent roamed the island of snow and ice for a month, trailing a sled of 120 kilograms. Days went past, until suddenly he stood eye to eye with nine wolves and he could shoot his memory cards full. The wolves did not hurt him (except tug at his trousers and tent) and went off a couple of hours later. The awesome photos form the tangible proof of this extreme trip.

With this, the seventh edition of the NVN International Nature Photo Festival came to a close. We thank all speakers, sponsors, supporters, stand holders, volunteers and visitors. Without you there would not have been a festival. We would like to see you again in two years’ time, as always in the second weekend of February at the eighth edition of the festival!